Commonly used short-wave antennas are mainly classified into three categories, the first type is vertical antenna (GP), the second type is even-stage antenna (DP), and the third type is Yagi antenna (YAGI). In addition, there are frame type, diamond type, dish type, etc. Here we mainly discuss the first three types of antennas, among which the focus is on the even-stage antenna and its deformation. From the point of view of use, GP antennas are mainly used for short-range communication, especially for short-range communication, which relies on ground wave transmission, and the effect is very good. The short-distance communication effect of the DP antenna is very bad. Due to the height limitation, it is impossible to set up a very high antenna. Generally, a GP antenna with a height of 5-10 meters is suitable for erection.

This is a typical DP antenna structure in which the red part is an insulator and is separated from the traction ropes at both ends. The main oscillator length is 1/2 wavelength * 0.95 shortening rate. Why use 1/2 wavelength? This is because the 1/2 wavelength center taps each end at 1/4 wavelength, so that the impedance of the antenna is 50 ohms to match the transmitter.

The DP antenna mainly uses sky-wave communication. The effect of long-distance communication is very good, and the installation is simple. It does not need to erect a very high antenna, and the production cost is low, so it is adopted by most radio enthusiasts. There are many variations of the DP antenna. Let me introduce you one by one.

Invert the "V" antenna, which is a variant of the DP antenna. One of the things can save the footprint of the antenna. On the other hand, it can improve the close-range ground wave communication effect of the original DP antenna. But after doing so, the antenna has directionality, see the maximum radiation direction in the figure.

Since short-wave transmitters can operate in various bands of 0-30M, a single-length antenna cannot meet our needs, and it is unrealistic to make one antenna for each band. 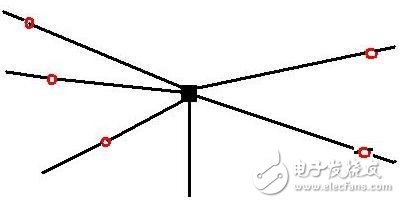 In fact, short-wave antennas are not mysterious, and they work well as long as they are adjusted. For example, my homemade "W" antenna is a variant of the inverted "V" antenna, and the effect is satisfactory. Therefore, as long as you master the principle and use your brain to make your imagination, you can also design an excellent short-wave antenna!