Skip to content
In the early morning of July 28th, Beijing time, the opening ceremony of the 2012 London Olympic Games officially kicked off at the Olympic Stadium. The magical stage play effect at the opening ceremony brought surprises to the world. Among them, LED smart devices brought new applications.

Throughout the modern Olympic epic stage of the opening ceremony of the London Olympics, the carnival film festival, hundreds of thousands of LED lights in the audience have been responding according to different scenes. Liu Feng, co-founder of the Tigers, said that this is the development of large-scale square performances. The new trend is also a challenge.

Liu Feng analyzed the opening ceremony of the London Olympics using LED intelligent display devices. Each auditorium has 25 cm square LED devices (3*3 color LED lights), and the overall synchronous display is controlled by a large central control system. The lighting program of the controller of the 80,000-seat LED can be modified according to the needs of the user, such as modifying the speed, time, pattern, synchronization and asynchronous of the flashing of the light, and has good expandability and can be based on the user. The need to perform multiple control panel combination synchronization, asynchronous operation to achieve higher requirements. 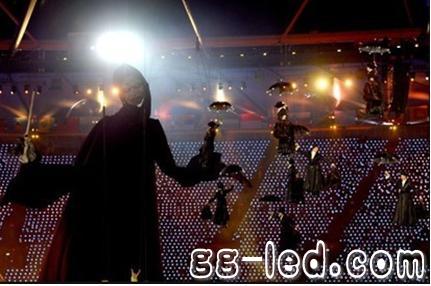 Liu Feng said that compared with the opening ceremony of the 2008 Beijing Olympic Games, the Chinese visual engineering peers are providing services, but the styles of the exhibitions are different due to different directors. â€œThe opening ceremony of the London Olympics gives us a strong signal: the modern dance beauty project is no longer just the cool technology style of the Spring Festival party we used to do, but the mass that extends to the large square and interacts with tens of thousands of viewers. The beauty project is both a challenge and an opportunity. Chinese colleagues need to refuel."