With the continuous development of mobile communication technology, users have put forward higher requirements for the content and quality of mobile communication. In order to adapt to the trend of global wireless communication, such as mobilization, broadband and IP, and to compete with some emerging mobile communication technologies such as WiMAX and Wi-Fi, at the end of 2004, 3GPP proposed following HSDPA, HSUPA and other technical standards. 3G Long Term Evolution (3G LTE). The goal of 3G LTE is to achieve higher data rates, lower latency, improved system capacity and coverage, and lower cost. At the same time, since LTE adopts an orthogonal frequency division multiple access (OFDMA) access mode, information of users in a cell is carried on different carriers that are orthogonal to each other, so interference comes from other cells. That is, interference between cells. Therefore, interference suppression between cells has become an urgent problem to be solved. This paper introduces the main interference suppression methods currently used in LTE, and compares the advantages and disadvantages of different methods.

LTE fills the huge technological gap between third-generation mobile communications and fourth-generation mobile communications. The goal is to build an evolving wireless access architecture that can achieve high transmission rates, low latency, and packet-optimized. The LTE system expects to achieve a downlink transmission rate of 100 Mbit/s over a bandwidth of 20 MHz, an uplink transmission rate of 50 Mbit/s, and a spectrum efficiency of 2 to 4 times that of HSPA. Support enhanced multimedia broadcast multicast service and packet switching of all packets, flexible bandwidth configuration, significantly improved transmission rate of edge cells, and enhanced system coverage. In order to achieve the above objectives, the LTE system adopts a flat network structure that is close to a typical all-IP broadband network, and adopts multiple input multiple output (MIMO), orthogonal frequency division multiplexing (OFDM), and hybrid automatic request weight. Advanced technologies such as HARQ and adaptive modulation coding (HARQ). The uplink of the LTE system adopts a single carrier frequency division multiple access (SC-FDMA) access method based on the OFDM transmission technology. The downlink adopts the access mode of OFDMA. The access mode of 0FDMA is different from that of code division multiple access (CDMA), and it is impossible to eliminate inter-cell interference by spreading. The LTE system has high requirements on spectrum efficiency, and cannot pass the traditional method of using higher multiplexing coefficients. The frequency reuse method is used to attenuate interference. Therefore, in LTE, attention is paid to interference suppression technology between cells. At present, the main ways of suppressing inter-cell interference discussed by 3GPP are divided into three types, namely, inter-cell interference randomization, inter-cell interference deletion, and inter-cell interference coordination/avoidance.

a) Cell-specific scrambling, that is, after channel coding, the interference signal is randomly scrambled. As shown in FIG. 1, for cell A and cell B, after channel coding and interleaving, the transmission signals are respectively scrambled. If there is no scrambling, the decoder of the user equipment (UE) cannot distinguish whether the received signal is from the local cell or from other cells, and it may decode the signal of the local cell or decode the signals of other cells, so that the performance is performed. reduce. The cell-specific scrambling can distinguish the information of different cells by different scrambling codes, so that the UE can only decode the useful information to reduce interference. Scrambling does not affect bandwidth, but it can improve performance. 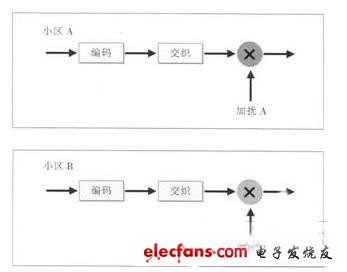 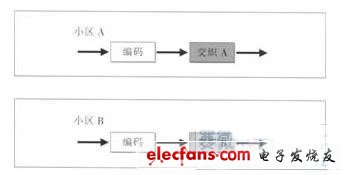 a) The interference cancellation is performed by the multi-antenna space suppression method at the receiving end. The related detection algorithm has been widely used in the research of multiple input and multiple output (M1 - MO).

b) Based on the method of checking N/Delete. Typically, if inter-cell interference is removed by using interleaved multiple access (IDMA), the IDMA can generate different interleaving patterns through a pseudo-random interleaver and allocate them to different cells. The receiver deinterleaves with different interleaving patterns to achieve the target. The signal and the interference signal are respectively solved, and then the interference signal is subtracted from the total received signal, thereby effectively improving the information of the received signal and the comparison noise ratio.

Comparing the several schemes for interference suppression of the LTE system introduced above, it can be seen that the interference randomization continues to use the mature scrambling technology of the CDMA system, which is relatively simple and feasible. However, the problem is to treat interference as white noise processing, which may cause measurement errors due to different statistical characteristics. Interference cancellation technology can significantly improve system performance at the cell edge and obtain higher spectrum efficiency, but it is not suitable for services with smaller bandwidth (such as VolP), and it is more complicated to implement in OFDMA system. There are not many studies on it in the follow-up. Interference coordination/avoidance is a hot technology in current research, and its implementation is simple and can be applied to services of various bandwidths. And it has a good effect on interference suppression, and is suitable for the specific access mode of OFDMA, but brings about the loss of the overall throughput of the cell while improving the performance of the cell edge user. The interference suppression methods between the above three types of cells can be combined with each other to complement each other to obtain higher system gain.

The main control unit of the equipment is PLC and the HMI (Human Machine Interface) is 7" LCD colorful touch screen. The equipment has varieties of operating modes, and can automatically record and save working status.The complete set of equipment is easy to operate, reliable in working, complete in protection and high in automation.

It has the features of high reliability, high pulse symmetry, strong anti-interference ability, quick reaction, as well as the advantages of no heat-generating, constant current, energy-saving which is compared with the discharge with the electrical resistance.