What does ODM mean? It means that a manufacturer A designs and produces products according to the requirements and specifications of another manufacturer B. In short, it is a â€œOEMâ€, the host provides information and information directions, and ODM manufacturers conduct research and development. .

This phenomenon is only in the field of mobile phones, and is often seen in the low-end notebook industry. In fact, strictly speaking, Xiaomi notebooks are considered to be ODM manufacturers. 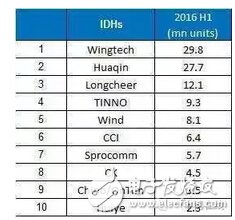 It can be seen that compared with the ranking at the end of last year, the rankings of the top four ODM companies have remained basically unchanged. This also means that these four companies have become the strongest companies in the field of mobile phone ODM in China.

The main brand customers of the top three ODM manufacturers are Xiaomi, Huawei, Lenovo and Meizu, so the shipment is relatively stable. As for Tianzhu Mobile, it mainly produces OEMs for overseas brands. At the same time, it also has two independent mobile phone brands, WIKO and SUGAR, so the overall shipment is relatively stable. This also makes the top four ODM vendors basically unchanged.

Li Huaibin said that brand manufacturers Xiaomi, Huawei, Lenovo and Meizu are still the main customers of ODM. In addition, overseas brand customers are gradually shifting to small and medium ODM companies based on cost demands and overall shipment decline.

It is worth noting that although the sales volume of OPPO and VIVO increased significantly in the first half of the year, ODM did not enjoy the high-speed growth of the two companies because the two smart phones were all self-developed.

In addition to mobile phones, mobile phone ODM companies have begun to accelerate the deployment of smart hardware and the Internet of Things. Among them, the company headed by Wentai frequently operates.

In the emerging field, Wentai has progressed almost every month. In April this year, Virtual Xiaomei Technology Co., Ltd. was established and cut into the virtual reality industry chain. Eyesight, which was also held in May, is an internationally renowned gesture recognition technology company. In June, it established a subsidiary company with the United States, and took advantage of the years of technical accumulation and R&D experience in the field of automotive system hardware, and achieved complementary advantages with the company and quickly entered the smart car networking market.

Huaqin and Longqi have also been involved in intelligent robots, VR and other fields.

From this point of view, relying on smart phone R&D and manufacturing, the layout of more diversified and intelligent fields will be the main strategic direction of mobile ODM companies in the next few years.