Solar energy is the most important energy source for green energy. It is an inexhaustible and widespread natural energy source. Its advantages are extremely rich, clean, safe, and inexpensive, and it has no impact on ecological balance. Solar LED street lights can not only use clean and free solar energy, but also provide highly efficient and environmentally-friendly LED lighting for roads, and at the same time, they can reduce greenhouse gas emissions and achieve green lighting. Make use of solar energy and LED light sources to make all kinds of new solar street lamps. Under the same illumination conditions, solar street lamps without LED save 40% of the solar cell and battery capacity, increase the lifetime of the light source by 10 times, increase the reliability by 5 times, and reduce the system cost by more than 40%. At the same time, it also solves the shortcomings of unreliable AC inverter in conventional solar street light systems, low temperature startup, and high system cost. [1] The problem with conventional solar street light drivers is that they have a short battery life. Boost converters do not have any protection against short circuits. An input fuse must be added to provide protection against short circuits. Using the LM3423 chip from NI (National Semiconductor), the solar LED street light driver designed for 12/24V battery input can effectively solve the problems of the traditional methods. Improve social and economic benefits.

Second, the problem of the traditional boost driver 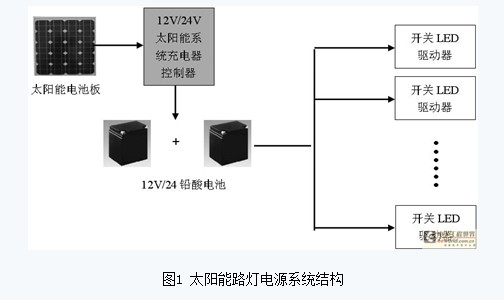 The structure of solar LED street lamp is shown in Figure 1. When the solar panel is exposed to sunlight, its internal PN junction will form a new electron-hole pair, which will generate a DC current in a loop. This current flows into the controller and will charge the battery in some way. The battery will be charged during the day and will provide energy to the LED at night.

The solar street light adopts the boost operation mode, which can reduce the number of LED drivers in the system and save the system cost. The boosted structure makes the number of LEDs connected in series no longer limited by the withstand voltage of the IC, but is determined by the MOS, so that more LEDs can be connected in series. Because most of the solar cell output voltage is not high, so the solar street light is more suitable for using the boost structure.

The use of current mode constant current design can make the output current independent of the input voltage change. When the battery is fully loaded and fast out of power, the street lamp can maintain the same brightness.

(1) Battery life is short: In Figure 2, even if the boost converter main switch is turned off, a current leakage path will still form between Vin and Vout. If there is any load connected to the output, the leakage current Ileak is close to Vin/Rload, then the presence of leakage current keeps the battery in working condition, which will shorten the battery life.

National Semiconductor's LM3423 chip has an input voltage range of 4.5V to 75V and is suitable for an extremely wide input voltage range; fast PWM dimming of 50KHz; internal reference voltage of 50mV-1.25V; operating frequency up to 1MHz; Drive capability of 750mA, ultra-low current shutdown is less than 2uA. Can be used to configure controllers for boost, floating buck, floating buck/boost, and low-side external MOSFETs in SEPIC topology [2]; use peak current mode controller and predictive off-time design to regulate LED current, The combination of the peak current mode controller and the predictive off-time design simplifies the loop compensation design while providing intrinsic input voltage feed-forward compensation; there is an integrated driver for controlling external dimming FETs and system "zero-current" shutdown features; and With LED status output flags, fault flags, programmable fault timers, and logic pins to control the polarity of the dimming driver.

Designing a boost LED driver circuit using the LM3423 is shown in Figure 3. In Figure 3, when the EN pin commands the boost converter to fail, the main switch, nDIMFET pin and FLT pin will be turned off, and the current flowing in from Vin will approach zero, effectively avoiding any leakage current flowing in series. LED, because the boost converter has failed at this time. Since the leakage current no longer exists, the battery can reach full state when it is stopped, which can effectively prolong the service life of the battery. 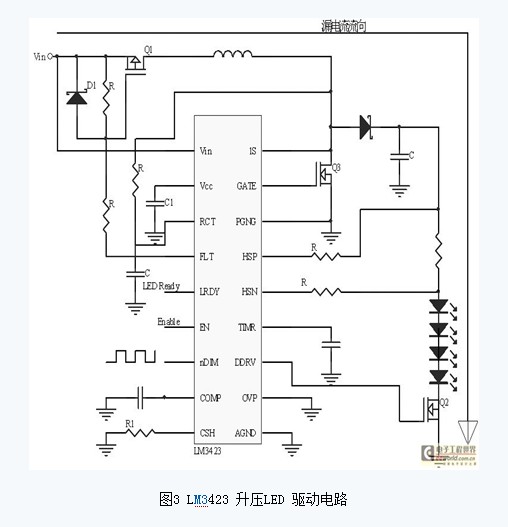 In Figure 3, if the series LED is connected to ground to form a short circuit, the input P-FET (Q1 in Figure 3) driven by the FLT pin will be turned off immediately to make the input path open, thus eliminating the need for an external fuse. Simple LED short-circuit protection.

The solar LED street lamp driver designed based on National Semiconductor LM3423 chip can effectively prolong the service life of the battery and provide reliable short circuit protection measures. After testing, the boosting efficiency has also been greatly improved. With the universal application of solar energy, the continuous improvement of solar LED street lamps and continuous improvement of the cost performance, solar LED will be widely used in urban and rural road lighting systems, and provide the society with environmental protection and economic resources.